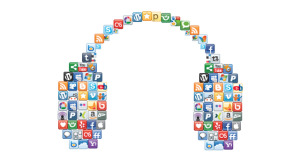 Shh! Do you hear that? It’s the sound of millions of people talking about you and your brand online. The good, the bad, and the ugly.

And the best part? It’s okay for you to listen. In fact, it’s highly encouraged. Crucial.

There are hundreds of social media platforms online, not to mention the millions of blogs, forums, and discussion boards. We live in a time where anyone anywhere can express their opinion and release it to the world at any time, with a potential reach of hundreds of millions, if not billions, of people.

Scary, eh? The trick is using that potential to your advantage. Dealing with the negative, and acknowledging the positive. Connecting and engaging. Social media listening refers to monitoring and listening to the real conversations people are having online about your company and brand. It’s socially acceptable eavesdropping. And used properly, it’s a tremendously powerful tool.

Direct Line of Communication with Customers and Prospects

Social media is remarkable. Marketing and sales departments from as little as 15 years ago would kill for the opportunities most of us today take for granted, a direct and free channel for speaking with millions of existing and potential customers. Consider this:

What does it all mean? Social media is dominating communications, and what people say on it matters. You’d better be paying attention. They say there is no stronger publicity than word-of-mouth. Imagine being able to lean in and listen to your clients talking about you at a restaurant, or gathering together tens of thousands of customers to discuss your latest product launch. It’s a focus group for the 21st century, to the nth degree. What if you could acknowledge each positive review, or address complaints almost instantly?

What Not To Do

But, and this is important, you have to be careful. You have to be active. And you have to be real. Social listening means just that – you listen. You monitor. You need to be aware of what exactly people are saying about you on at least the major platforms (Facebook, Twitter, Google+) if you want to harness the awesome power.

The pitfalls are found in treating all dialogue the same or taking too long to respond. Social media, and the world as a whole, wants instant gratification. Instant recognition. Instant response. It’s possible, you just need to have the mechanics in place to do it. Setting up social media profiles and then not paying attention to them is a slap in the face. And potentially dangerous. Completely automating your social media platforms – for both posting and responding – is equally bad. Consider the following missteps:

Instead of set it and forget it automation, you need a healthy mix of strategic automation and real engagement. It’s never a good idea to create a “one size fits all” response to every online mention. A real live person should monitor social media channels using any of the countless tools for the job, including:

These services can be set up to report or alert every time someone mentions your company name, brand, or keywords. Then you have the opportunity to handle it in a quick, professional, and human way. According to Social Habit, 42% of people expect a response to a complaint posted on social media within 60 minutes. 7 days per week. Fail that, and you’ve made the situation at least slightly (if not much) worse.

Proper monitoring of channels allows you to respond to opportunities and address issues. Customers want to be thanked, or at least acknowledged, when they post something positive. A quick “hey thanks” goes a long way. Likewise, acknowledging a customer complaint, even if you can’t do anything about it right away (or ever) is a proven method to diffuse the situation. It’s all about connection and engagement.

Reach out regarding complaints that involve you but are not your fault, like Taylor Guitars. They addressed a customer whose guitar had been damaged by an airline. They offered their sympathies and suggestions for certified locations to get it fixed. And more importantly, they impressed that one customer – and everyone else who saw the exchange – by responding to something that involved them only indirectly. That’s an example of fantastic monitoring and brand awareness. You can bet they gained new clients and fostered loyalty through their response.

Virtually every department – from sales to marketing, from customer service to R&D – can benefit from social listening:

And social listening need not be only for your brand. You can listen and monitor your direct competition, too. What are people saying about them? You can replicate (but not copy) their successes, and avoid their hiccoughs. It’s like being allowed to sit in on their board meeting or focus group for their next big product. Follow them. Monitor them. And actively use the data.

Social media can be a god-send. The data and opportunity it provides are unparalleled. But you need to remember the golden rules:

Address things as they occur. Use Facebook, Twitter, and Google+ to actively engage and connect with your customers and fans. Respond as a human, not a machine, to both positive and negative comments. Monitor the major social media platforms for any mention of your name or brand. And don’t be afraid to have a little fun, like Bodyform’s tongue-in-cheek response (from the CEO, no less) to a post on their Facebook page. You’re only human, after all.

Social listening makes you a fly on the wall in millions of homes and dozens of countries. It’s an almost magical ability to eavesdrop on customers, competition, and the market in a way that past businesses could only wish for. Everyone is sharing their opinion, and ranting, and praising, and complaining with the understanding that you may be listening. In fact, they want you to.

Don’t let them down.

Not sure where to begin? Connect with us, and let’s chat about how we can help.

Ask Us About the Exhalarator

Our automation stack - customized for your business 519-955-1355
Exhale@exhalemarketing.com